The Chatham County Partnership for Children is beginning work on an Early Childhood Community Assessment to help identify and understand the needs of children ages 5 years old and younger across various demographics in the county.

Genevieve Megginson, executive director of the Chatham Partnership for Children, hopes the plan will “get to the heart of the real needs of Chatham children and their parents and caregivers.”

The community assessment hopes to fill the gaps of existing child-care coverage in the county by examining the current supply and demand of providers and advising future local policy decisions around early child care through its Early Childhood Action Plan.

The way to reach those caregivers is taking on a variety of mediums, she said, including surveys, community feedback meetings, making a documentary and more.

This assessment was necessary because the county has changed by leaps and bounds since the last assessment in 2008, according to Megginson.

Understanding the nuances and intricacies of child care in any place is difficult, but that is especially true in Chatham where the diversity of experiences ranges so broadly for caregivers. Megginson said she hopes community members from all walks of life will engage with this process to make the plan as impactful as possible. The engagement process, she says, is “grounded in equity.” 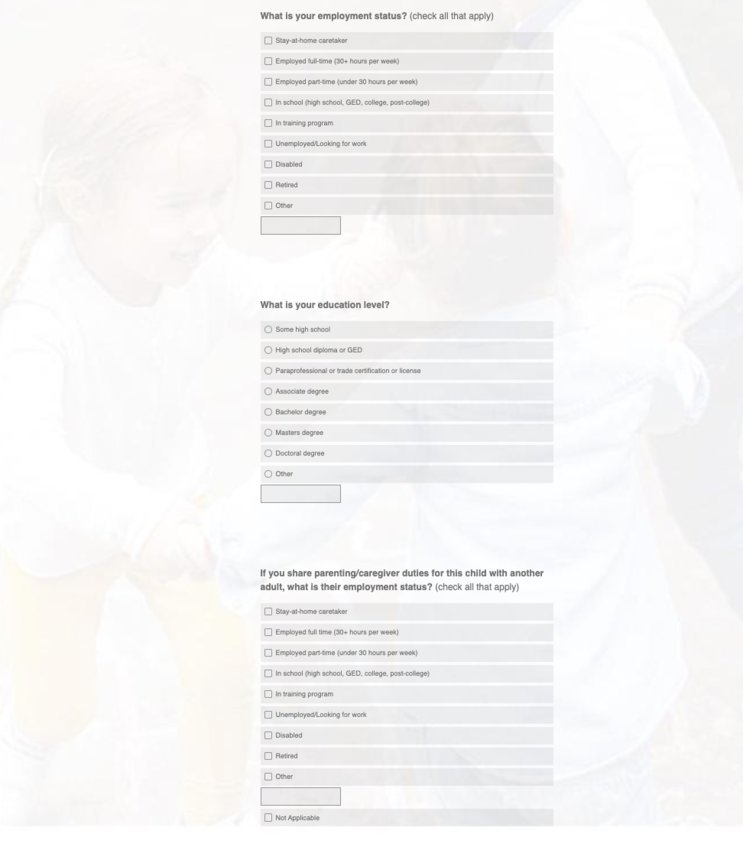 “Watching the response rates for different segments in our community will help direct outreach,” she told the News + Record. “Along the way, specific efforts are planned to connect with hard-to-reach parents and families in every community so that the survey represents the county’s demographic, economic and geographic diversity.”

The challenges of distributing this survey and ensuring its accessibility were likely invisible to the layperson, but Megginson said everything from the wording of the questions on the survey to the font choice was meticulously vetted to make sure it could get into the hands of anyone who wanted to get involved.

The process has been personally enlightening because it made her realize how much detail goes into implementing equity.

“We’re going to be trying to get parents who either have children in child care or who aren’t in school yet,” Megginson said. “And also parents whose children are in kindergarten who still have that fresh remembrance of what their needs were before their kids became school age.”

The county-focused questions ask about satisfaction levels with the number of high-quality early care and education options that are available in Chatham County, and whether a public pre-K program, if available, would generate interest for parents.

It hopes to understand the status of supply and demand for early child care in the county.

With the survey officially launched last week, the Community Needs Assessment is officially underway. Megginson said she hopes they receive an adequate number of survey responses — around 800 total responses — by February, so the Partnership can begin the second phase: community interviews.

Voices at the table

Part of the reason she recognized the detail necessary is because of the work with the project’s consulting partners — Partners for Impact and Community Voice Consultants. The consulting partners on the project have both bought into the goal of equity, too. The assessment team is also working with Community Organizing for Racial Equity (CORE) to develop an equity plan for the project, which will be released later this month.

Megginson said the unique skills of each firm make the collaboration exciting. For example, Community Voice Consulting has a unique method for gathering input using a documentary film process and Partners for Impact has strengths in community change initiatives, strategy development and evaluation.

Beth Bordeaux, founder of Partners for Impact, has more than 15 years of experience working on projects related to early child care. During that time, Partners for Impact has engaged in several similar community assessments across the state. She said the goal of her work is always centered around community change.

“We’re always looking at assisting communities to make change in the ways that they are seeking,” Bordeaux said.

Partners for Impact will be taking the lead on the supply and demand analysis by analyzing survey results while Community Voice Consulting will lead the community feedback and documentary processes.

The project also aligns with the values of Partners for Impact, Bordeaux said. She believes the endeavor is especially exciting because it is aimed at bringing equitable, systematic change to the county.

“​​There’s an opportunity for anybody who wants to be involved, to be involved,” Bordeaux said. “I think that’s pretty special about this project. You don’t always get that level of a comprehensive approach, but you’re bound to get a strong plan with this many voices coming to the table.”

Working with these consulting groups, according to Megginson, has been tremendously helpful because of their experience in this field and their understanding of what it takes to produce a project of this magnitude.

“It really is kind of like being in the room with famous people,” Megginson said. “They have done some remarkable work over the years. And I’m just really pleased that we have the opportunity to bring them to Chatham.”

After gathering the survey data, the team will comb through the responses to find interviewees to speak about their personal experiences. Megginson said this allows the assessment to dig deeper into the state of child care in the county and understand residents.

After those interviews, there will be several community input sessions for the public to provide feedback. Both the interviews and these feedback sessions will serve as footage for the documentary made by Community Voice Consultants as part of the assessment.

“We’re doing an assessment where we really listen to, and elevate, voices,” Megginson said. “So we’ll hear trends across the board from families and providers that we might look into deeper.”

The team hopes a rough draft of the assessment will be available for the community by the end of April. The whole process will extend throughout 2024.

For more information about the Chatham Partnership for Children and its Community Needs Assessment plans including methodology, resources and how to get involved, visit chathamkidsmatter.org or email genevieve@chathamkids.org.