Chatham County Public Health Director Mike Zelek, Sheriff Mike Roberson, Courts Program Director Renita Foxx and Chatham Drug Free Community Outreach Coordinator George Gregor-Holt presented the plan on behalf of the Sheriff’s Prevention Partnership on Controlled Substances. Founded in late 2017, the group has been working to address the opioid epidemic in the county for five years and was initiated as a partnership between the county’s Public Health Department and the Sheriff’s Office.

A number of community groups and entities are also involved in the partnership, including Chatham County Public Schools, Chatham Recovery and the Chatham County Courts Program.

“We’re fortunate, as these opioid settlement dollars come in, that we already had some partnership built for that,” Zelek told the News + Record. “...We’ve met a few times this year as a partnership to say, collectively, where do we think this should go? Where can we invest the dollars? And do we want to keep this partnership going to advance this work?”

During a July county commissioners meeting, the County Manager Dan LaMontagne announced that Chatham had received its first payment of $111,719 as part of the national opioid settlement, of which North Carolina will receive $750 million over the next 18 years. Between 2022 and 2038, Chatham County is expected to receive $2,907,865, according to the Community Opioid Resources Engine for North Carolina.

The settlement resolves litigation between state and local governments and the three largest drug distributors, McKesson, Cardinal Health, and AmerisourceBergen, and the manufacturer Johnson & Johnson in their collective role in creating and sustaining the opioid epidemic.

Zelek said it’s critical to consider that the settlement funding has a longer range, over the next 18 years, and how that will shape strategies within the county, calling it “more of a marathon than a sprint.”

“It’s important to kind of think about that as we plan, to say this isn’t one year of funding where we need to just put something in place that’s time limited and see what we can do in that limited time,” he said.

Gregor-Holt said during Monday’s work session that the partnership considered two MOA options in outlining how the settlement funds should be used. Option A would fund items from a shorter list of “high-impact strategies” to address the epidemic, while Option B would involve a collaborative strategic planning process, and then the process of choosing strategies from a larger list.

The partnership has opted for the former, with Gregor-Holt stating the group felt like it’d already done the work of holding collaborative, stakeholder conversations and thought it was prudent to begin taking action more immediately.

The collective impact plan for the opioid settlement funds includes:

• Creating a new full-time position called the Overdose Prevention Coordinator, which will be housed within the CCPHD

• Supporting the Sheriff’s Prevention Partnership on Controlled Substances, specifically with data dashboard and tracking tools, marketing and communications, training and materials and supplies

When it comes to strategies aligned under Option A, the opioid settlement funds would be used specifically in:

The settlement money comes at a critical time. In 2021, for the first time, the rate of drug overdose deaths in Chatham County surpassed that of the state rate, according to a July 2022 fact sheet by the CCPHD.

In 2020, Chatham County had 22.8 unintentional overdose deaths per 100,000 residents, the county’s 2021 community health assessment reported. The overdose deaths included opioid-related deaths as well as deaths due to overdoses from heroin, cocaine and methamphetamine. The report states that though the rate was low in comparison to other counties, it was the highest in Chatham since the data was first tracked in 2000.

Zelek noted that the climbing rate of overdose deaths mirrors that of statewide and national trends. In Chatham County, since 2016, the number of drug overdoses has been growing each year despite the rate of residents being prescribed opioids decreasing in the same time period. The number of deaths rose sharply by 1,200% from two in 2016 to 26 in 2021, according to CCPHD. 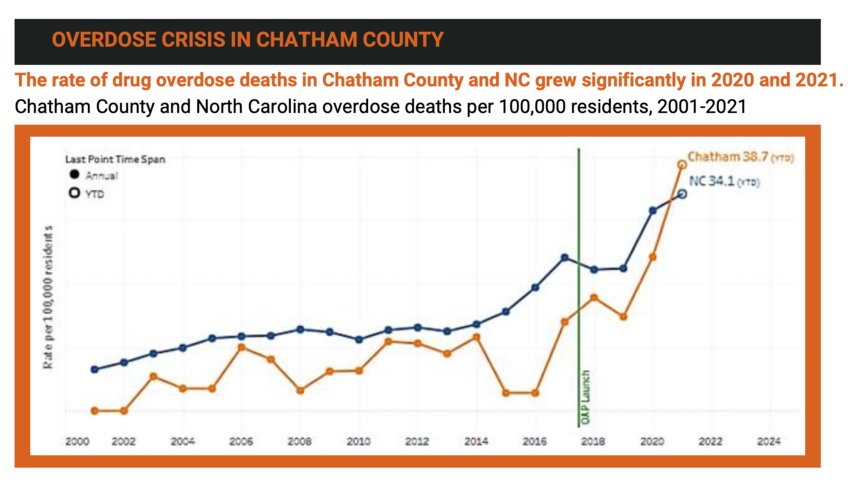 “Just the rate of increase in Chatham has been concerning, despite some pretty strong efforts to try to combat it,” Zelek said. “And so I think that’s just a reminder of how important it is to have collaborative work on something like this. None of us can address an issue like this alone, we all have to work together to make a real, meaningful change.”

Part of how he and the partnership view that change happening is through the creation of an Overdose Prevention Coordinator who would oversee the county’s Coordinated Overdose Prevention Plan and lead Chatham Drug Free. The coordinator will also be responsible for attaining additional funding and support for substance use prevention and for ensuring all requirements for local and state settlement funds are met.

The salary for the position is between $56,169 and $71,614, depending on experience. A full description of the position’s responsibilities, along with the application itself, is available at www.chathamcountync.gov/Home/Components/JobPosts/Job/4409/44. Interested individuals can apply online or mail an application to Chatham County Human Resources.

Though the partnership is hopeful about the impact the position will make in the county, members presenting during the commissioners’ work session also outlined ongoing key efforts by stakeholders to combat the opioid epidemic. The Sheriff’s Office reported having saved 116 lives with narcan — an FDA-approved medication that can treat an opioid overdose emergency — since 2017 through first responders. Presenters also highlighted the Recovery Celebration, hosted by Chatham Drug Free, as an important event to uplift members of the community.

Both Roberson and Foxx reiterated that a crucial aspect of the county’s approach to tackling the opioid epidemic lies in prevention, especially in the intersection of drug use with mental health.

“And I think that if we can address mental health inside of the schools and the younger age [of those impacted], that maybe we can kind of cut some of this off before it even gets started,” Foxx said.