Chatham has a broadband issue, but there’s good news

One thing Chathamites of all political persuasions can agree on is that the county has an internet problem.

In fact, the lack of broadband access in Chatham was ranked as the number two issue in the 2022 Chatham Community Assessment behind only water quality, with 35% of residents ranking it as their primary concern.

It’s not a stretch to say broadband in the modern age is a necessity. The ubiquity of the internet has made it a necessary tool for work, education and everyday life. So when residents throughout the county lack access to this tool, it presents a threat to Chatham’s ability to continue progressing and growing.

Last Thursday, Innovate Chatham, a local organization dedicated to teaching others about technology, held the first of two Internet Discussions. The discussion at 79 West Innovation Hub in Pittsboro was meant to receive public feedback on a new initiative from Chatham County — The Chatham Digital Inclusion Plan. Innovate Chatham hosted a second of these talks in Siler City this Thursday, Jan. 19, at the N.C. Arts Incubator.

The plan is modeled on other neighboring counties with similar broadband struggles like Alamance County. Once completed, the plan will be submitted to the N.C. Dept. of Information Technology (NCDIT), which will allow Chatham to seek further state and federal funding. Chatham has a draft based on what the county believes to be existing broadband issues and the current programs available to amend those issues.

The Federal Communications Commission (FCC) recently created a broadband map of every home in the U.S. to help guide future service and improvements. The map is an attempt to help mend that access problem that persists in Chatham and across the U.S. The problem with this map, however, is its massive imperfections.

If we zoom in on Chatham County, the map shows close to zero broadband access issues in the northeast portion of the county, and limited issues in Siler City. If you’ve been to those areas, you’re likely aware that’s simply not accurate. The inaccuracy of the FCC map presents a problem because if the map is inaccurate, then the people in need of funding for broadband won’t receive help. 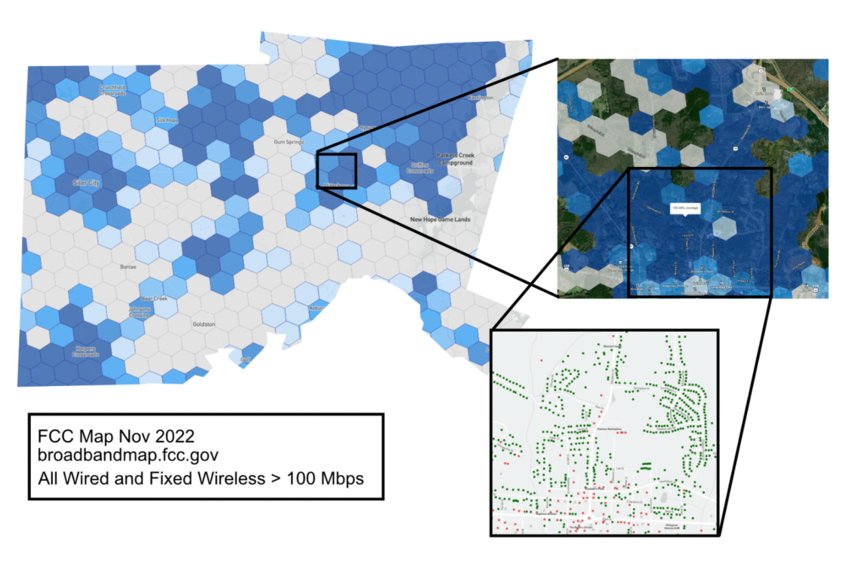 The map from the FCC will be used to determine federal and state broadband funding in the future, but many in Chatham fear it's inaccurate.

But there’s good news: you have the power to change that map, and perhaps bring more broadband funding dollars to Chatham County.

At Thursday’s discussion, Waring said neighborhoods across the county should be organizing to bring awareness to the flaws of this map. All neighbors have to do is go to https://broadbandmap.fcc.gov/home, insert their address to view what the FCC says about their broadband status and if they believe the status is incorrect, challenge the status.

Challenges can be made for a variety of reasons including inaccurate download speeds, inaccurate internet service provider (ISP) information or other complaints found in the map. So long as you can provide documentation or evidence of the challenge, all complaints will be accepted.

While the complaint period from the FCC closed last Friday, Jan. 13, late challenges will be accepted. For assistance filing a complaint, Waring said contact help@innovatechatham.org.

Waring expressed frustration on Thursday that the challenge period was closing so quickly after it opened. The FCC released the map just more than eight weeks ago, but the challenge period included Thanksgiving, Christmas and New Year’s — all times where U.S. residents are largely off of work or not as attuned to the news cycle.

If Chatham is able to bring in federal and state funding to improve broadband infrastructure, it may also help mend internet accessibility issues for low income households. As it stands, the average internet cost in Chatham is about $75 per month, according to data from the FCC. This rate is unaffordable for many in the county, not to mention internet costs are coupled with rising prices on computers, smartphones and other internet-accessible devices.

There’s more good news on that front too. Internet is available at a reduced cost if you qualify for $30 per month or less through the Affordable Connectivity Program. Qualified applicants include those with household income less than 200% of the federal poverty line, which is $55,500 for a family of four. Applicants can also qualify if their household has a student eligible for free or reduced-price meals. If you qualify, ISPs like Verizon, AT&T and Spectrum all have discounted internet rates too.

There are also resources for those who cannot afford a computer, including Kramden Institute — which provides free desktop computers to families with K-12 students and low-income adults. Kramden also provides classes to help new users get acclimated with using the internet and their new devices. Chatham County also provides computer classes for those in need through the Chatham County Community Library.

It’s no secret Chatham internet is shoddy at best, but the county and organizations like Innovate Chatham are working toward solutions to make broadband affordable, accessible and available to all Chathamites. Digital inclusion is an important step in making that vision a reality, and you can be part of seeing it to fruition. For more information about the Digital Inclusion Plan visit   www.innovatechatham.org/digitalinclusion or email help@innovatechatham.org.