A map of the property owned by Hardip Dhillon, the owner of Skymart in Moncure, along Old U.S. Hwy. 1. Dhillon wants to rezone the properties so he can move his business to a nearby location and make way for roadway changes.
Map via Chatham County Planning Board
Posted Wednesday, January 25, 2023 11:44 am
Updated: Wednesday, January 25, 2023 1:27 pm
BY BEN RAPPAPORT, News + Record Staff

PITTSBORO — The Chatham Board of Commissioners heard several rezoning requests — most concerning properties along Old U.S. Hwy. 1 in Moncure — at its meeting at the Chatham Agriculture & Conference Center in Pittsboro last Tuesday.

Commissioners could not take formal action on most rezoning requests because they must first be referred to the county planning board. The recommendations along the Moncure roadway, however, show property owners and potential developers are seeing the industrial potential in what will soon neighbor VinFast’s 1,700-acre electric vehicle manufacturing facility.

During the meeting, the board held two public hearings for properties owned by Hardip Dhillon, the owner of Skymart in Moncure, along Old U.S. Hwy. 1.

The first would turn a 15-acre residential area and mobile home park into a zone for neighborhood businesses, meaning it could host small-scale churches, restaurants, daycares and convenience stores. Angela Plummer, Chatham County’s assistant planner, said the request could help bridge the gap between residential neighborhoods and incoming industry. There are currently no single-family homes and two mobile homes on the site, but Dhillon’s attorneys told commissioners the mobile homes would be vacated by the time the zoning request was officially approved.

The second of Dhillon’s properties was a 16-acre property that contains the Skymart in Moncure. Because of roadway improvements needed by N.C. Dept. of Transportation to make way for the VinFast facility, the Skymart facility would have to be moved. Dhillon filed to rezone the property he already owns to move the existing business to a nearby location. Plummer said if approved, the move would keep retail in the county by continuing existing business in a new location. Both items were referred to the planning board.

Three items on the consent agenda of Tuesday’s meeting made final decisions on rezonings also along Old U.S. Hwy. 1 or in the nearby Moncure area. All told, 46 acres were rezoned with the approval of the consent agenda. One property currently owned by Because of His Grace LLC was switched from residential to neighborhood business. The other two properties — owned by Russ Anderson and S.T. Wooten — were switched from residential to industrial zones. Industrial zoning could include lumber yards, electronics manufacturing, pharmaceutical manufacturing, industrial supply sales and service, etc.

Two other public hearings occurred at Tuesday’s meeting outside of Moncure. The first concerned Aaron Horton Toothbrush LLC, which aimed to rezone the property along Mt. View Church Rd. from residential to industrial. Neighbors who live adjacent to the property nearby spoke at the commissioner’s meeting against the potential rezoning. They cited concerns of pollution and the destruction of their neighborhood.

“If you look at that area and this neighborhood, you see why people move to Chatham County,” said Johnny Shaw, a resident of Mt. View Church Road. “If you change the zoning, you’re going to change the integrity and the makeup of the neighborhood.”

Shaw also said he and his neighbors have put a lot of time into cleaning up the Rocky River, which runs adjacent to the roadway. He believes approving the rezoning would ruin the progress made on cleaning up pollution in the river. 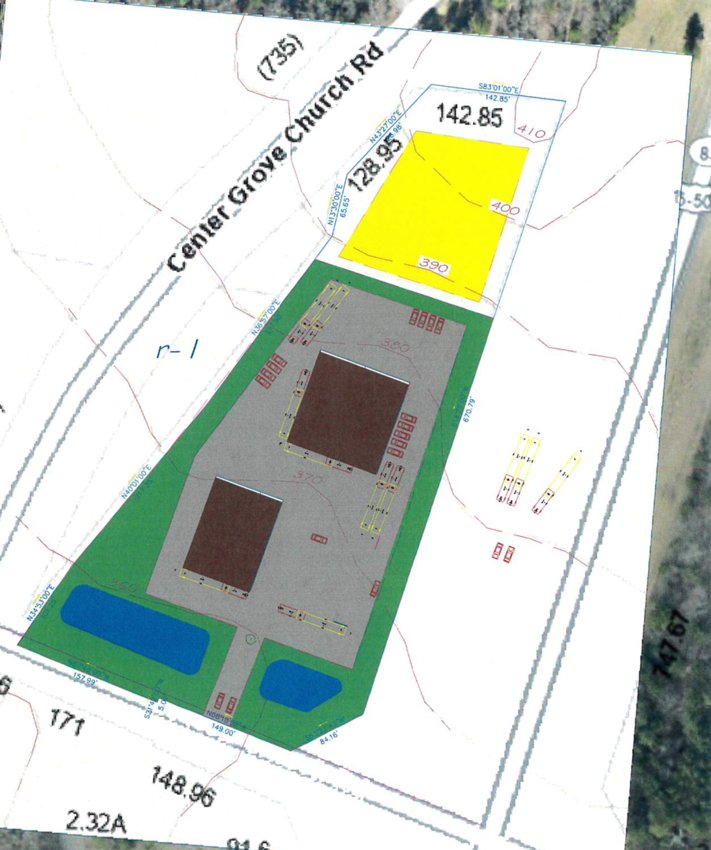 Parcel map of the site Aaron Horton Toothbrush LLC hopes to rezone. Neighbors along the adjacent neighborhood fear the rezoning would cause pollution …

There was no action taken on the item, which was referred to the planning board.

The final public hearing addressed potential build-out portions of Fearrington Village. Developers Fitch Creations, which built the original Fearrington site that was approved in 1974, now say they want to build a subdivision within Fearrington called Granville. 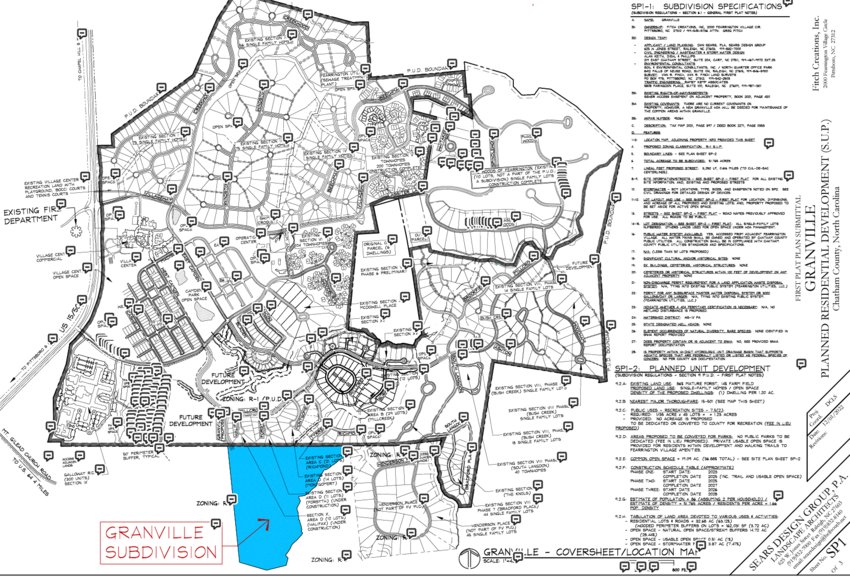 Site plan of the proposed Granville subdivision in Fearrington Village. The site by Fitch Creations covers 51 acres with 43 lots.

The planned residential development would include 43 lots over 51 acres. Fitch Creations, represented by Greg Fitch and Dan Sears, said it would also ensure the subdivision had its own homeowners association, separate from the Fearrington HOA. Sears said the development appeared necessary because Fearrington had reached its limit and needed to be built out to accommodate the growing interest in the area.

“Granville has been planned to blend in well with the village and will provide additional open space and walking paths,” said Rose Krasnow, president of the Fearrington Village HOA.

While she said the HOA was not opposed to the development, she raised several concerns including construction noise and stormwater features that include seven wet ponds. Krasnow also feared a financial burden on the existing HOA because of the growth.

Sears said it will continue to work with existing homeowners to make the addition of Granville smooth and ensure the community blends into the existing Fearrington properties. There was no action taken on this item by commissioners, which was referred to the planning board.

Some new faces will be deciding on these rezoning requests as commissioners filled some of the open seats on the planning board during last Tuesday’s meeting. Each commissioner has two appointments, including one residing in the commissioner’s district. The terms expire when the appointing commissioner’s term expires. The full County Board of Commissioners also makes one at-large appointment to the Planning Board. The appointees were:

• Dist. 4: Tony Maher was appointed by Commissioner Katie Kenlan. Her second appointment was postponed until Feb. 20

• Commissioners heard a second-quarter update on the county budget for Fiscal Year 2023. Darrell Butts, the county’s budget director, told commissioners the county spent 39.6% of its proposed budget expenditure so far of the total budgeted $171,149,892. The county has received 41.1% of the proposed budget revenues. Butts said these numbers were on par with previous fiscal years in Q2 and the county was on track to stay within the budget for the year.

• An update on the county’s American Rescue Plan Act (ARPA) funds was also shared with the board. Thus far, the county has spent 42%, or $6 million of the total $14,464,924 it was awarded through ARPA. The deadline for budgeting and allocating the funds is Dec. 31, 2026, with the deadline for expending the funds on Dec. 31, 2026. The funds have been used for Capital Improvement Projects, vaccine incentive programs and improving park access. For more information visit www.chathamcountync.gov/arpa.

The next scheduled Chatham County Board of Commissioners meeting is at 2 p.m. on Monday, Feb. 20, at the Chatham Agriculture & Conference Center in Pittsboro. For more information visit www.chathamcountync.gov/government/board-of-commissioners.

Reporter Ben Rappaport can be reached at brappaport@chathamnr.com  or on Twitter @b_rappaport