On Aug. 31, N.C. Gov. Roy Cooper announced $206 million in state funding toward improving broadband access across the state. The money aims to bring high-speed internet to rural counties in North Carolina, including Chatham. Providers in the county are eligible for up to $8 million in funding per fulfilled application through the GREAT grant.

GREAT program provides funding to give broadband access to 85,000 households and 2,400 businesses that cover 69 counties. This is the state’s largest round of GREAT grant awards to date, with more funding expected to be announced in the fall.

According to County Manager Dan LaMontagne, Chatham County had six potential providers apply for the grant program, the second most of any county in the state. Last week’s announcement approved one of those applicants, Connect Holding.

The other applicants were AT&T, Spectrum, Conterra Ultra Broadband, Northstate and Randolph Communications.

The approval of Connect Holding, also known as Brightspeed, connects 1,914 Chatham addresses to broadband services. Final maps and a list of addresses have not yet been shared, and a timeline for those maps is still yet to be determined.

According to the award letter from the North Carolina Department of Information Technology (NCDIT), Connect Holding was awarded $4 million through GREAT Grant funding from the state for its Chatham County application. 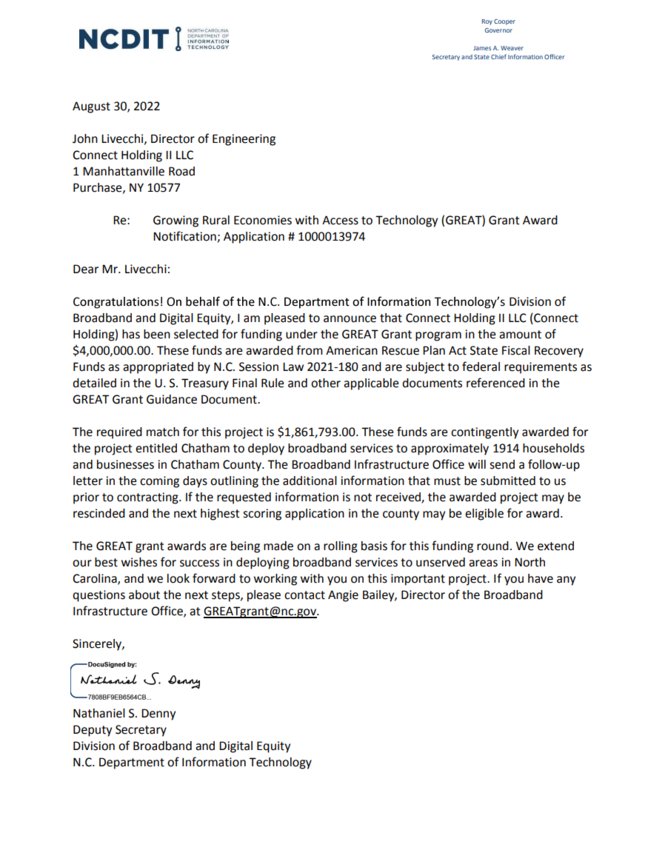 The top existing providers in the county are Century Link, Spectrum and T-Mobile.

In its application, Connect Holding accounted for the most addresses covered with the grants at 5,578 total in Chatham County, with more than 5,400 of those being residential. No other applicant had more than 1,500 total addresses.

Local governments, like Chatham County, do not receive funds directly from the State’s GREAT grant program. Rather, GREAT grant funds are awarded to the chosen internet service providers (ISP). Likewise, local governments are not involved with choosing which ISPs are awarded this funding; scoring and choosing which ISP is awarded funding is a function of the state’s information and technology department.

Local governments are, however, authorized to partner with the ISP awarded GREAT grant funding by way of assisting financially with the required grant award match. Chatham County does plan to offer a financial contribution to the match amount with the use of the County’s American Rescue Plan Act (ARPA), according to Chatham County Public Information Officer Kara Dudley.

The letter from NCDIT also states Connect Holding is required to partially match the grant funding by paying $1,861,793 — 46.5% of the total grant. The GREAT funds are also performance-based and only awarded if Connect Holding creates broadband services for the 1,914 households and businesses in Chatham County it has promised in its application.

With last month’s announcement from Cooper, $260 million in GREAT grants have been awarded to providers since July 2022.

“High-speed internet access is critical for people to work, learn, access telehealth and connect with one another,” Cooper said in a press release about the announcement. “Thanks to this significant GREAT grant award funding, many more North Carolina families and small business owners will have the tools they need to succeed in today’s digital world.”

“We are excited to be awarding this unprecedented amount of funding to bring high-speed internet access to such a large number of residents and businesses across the state,” said N.C. Dept. of Information Technology Secretary and State Chief Information Officer Jim Weaver. “These funds will go a long way in closing the digital divide by bringing equitable access to both rural and urban communities.”

LaMontagne said he hopes Chatham County will be awarded at least two total GREAT grants — meaning Chatham would be awarded up to $16 million of the state’s available $350 million in the GREAT program.

More grant funding is available to the county for broadband access. The Completing Access to Broadband (CAB) Grant program is expected to open soon. CAB provides an opportunity for individual N.C. counties to partner with the state to fund broadband deployment projects in unserved areas of each county.