Chatham County’s municipal election season is officially starting this week, with Thursday marking the beginning of early voting for seats on the Pittsboro and Goldston town boards, along with two seats on the Goldston Gulf Sanitary District.

Among them, the Nov. 2 election will feature only two contested races, both in Pittsboro — the mayoral race between incumbent Jim Nass and his challenger, former Mayor Cindy Perry, and a race for two board seats between three contenders.

Siler City has moved to postpone its elections until March 8 due to delays in receiving the 2020 Census data.

Pandora Paschal, the director of Chatham County’s Board of Elections, said that while the deadline to register to vote has passed, Chatham County residents can do same-day registration during the early voting period, which closes Oct. 30.

“Early voting will take place at the Chatham County Agriculture & Conference Center,” she said. “We’re only having one spot for early voting these municipal elections.”

On Election Day, Goldston residents will cast ballots at Goldston Town Hall, while Pittsboro voters will vote at the Ag Center. 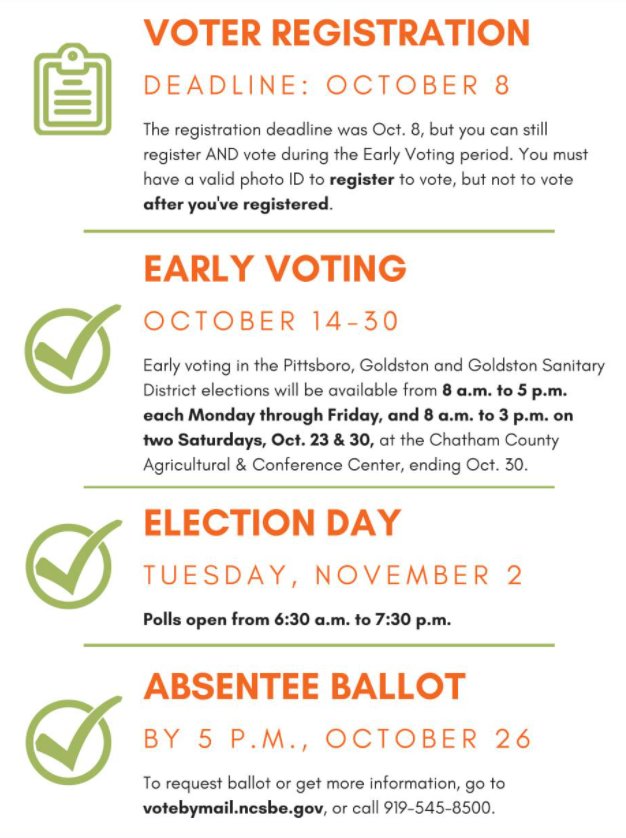 Absentee voting has also begun; voters could start requesting mail-in ballots for this year’s municipal elections on Oct. 3, with the deadline coming up on Oct. 26. All mail-in ballots must be turned in by 5 p.m. on Election Day or be received within three business days and postmarked by Nov. 2.

Paschal said there’s a form voters must fill out on the county’s board of elections website to ensure they are able to receive their ballot and turn it in correctly. The form can be accessed at votebymail.ncsbe.gov.

However, if voters cannot request a ballot themselves, they can have a near relative fill out their request for them.

Paschal said the elections board has begun to hold weekly meetings to count the absentee ballots brought to her office; those meetings will be live-streamed for the public.

“It’s supposed to be an open process,” she said. “We did that in 2020 during the general election for the COVID pandemic; we live-streamed more meetings and people could tune in that way.”

In the race for Pittsboro mayor, incumbent Jim Nass is running against the person who held the seat previously, Cindy Perry.

Nass, a native of Denver, Colorado, was elected mayor in 2018. He told the News + Record that being the mayor of Pittsboro is more than just making sure things run smoothly at Town Hall.

“I see the role of Mayor as one of, not only working closely with the Commissioners and Town staff, but also representing the values and ethos of this amazing place we call home,” he wrote in a candidate questionnaire.

Perry was the mayor of Pittsboro from 2015 to 2019. She decided to not seek reelection in 2019, saying she wanted to dedicate her time to assisting the local domestic violence agency, Second Bloom. She said that since leaving office, a number of Pittsboro residents have approached her and asked her to run again.

“I realized that I sincerely missed my work as Mayor,” she wrote in a questionnaire. “As I am completing my Board service with Second Bloom, I am ready to return to local government.”

Two commissioner seats are up for grabs in the 2021 election. Three candidates are vying for the two posts: incumbents Pamela Baldwin (Pittsboro’s Mayor Pro Tem) and Michael Fiocco, plus newcomer James Vose.

Vose owns a business called Vose Natural Stone and has two sons. He said he has been encouraged to seek office by friends and community members.

“After discussing it with my sons, we decided that now was the ideal time to step up and support this community, engage with neighbors, and have a positive influence in the growth that is already under way,” he said.

Fiocco has served as a Pittsboro commissioner for 12 years, and said he’s more than qualified to continue serving the town he calls home.

“I have the temperament, perspective and work ethic to process the myriad concerns of the Town in a timely manner in order to promote the public health, safety, welfare and smart growth of the community,” he told the News + Record.

Baldwin has served as a commissioner since 2005 and says she wants to see Pittsboro grow and thrive.

She said she wanted complete the work she’s been doing on behalf of the town of Pittsboro to make it “a place to thrive and excel for all its citizens.” She wants to focus on recruiting jobs, affordable housing and the town’s drinking water concerns.

Goldston’s mayor election is uncontested. Jonathan Hensley is the only registered candidate aiming to take outgoing Mayor Tim Cunnup’s seat this year. Hensley, 37, is a Goldston native and said he wants to focus on bringing economic growth to his home.

“I want to offer something for the community so that if local families want to start up a bakery, or some type of little antique store or something like that, they can,” Hensley previously told the News + Record. “I would really like to see more shops in Goldston to bring in more commerce to benefit everybody.”

The Goldston Gulf Sanitary District Board has two seats on this year’s ballot and two candidates — Adam Pickett and Hayden Burke.

Correction: In an earlier version of this story, the number of open seats for the Goldston Gulf Sanitary District was incorrect in one place due to an error introduced during the editing process. The story has been updated to reflect there are two open seats for the sanitary district. The Chatham News + Record apologizes for the error.