As the impacts of climate change continue to be felt on a national scale, Chatham County is not excluded. Local officials are planning ahead by looking for more sustainable wasterwater practices, development and energy. Pictured here is the Hickory Mountain Township in Chatham.
Staff photo by Peyton Sickles
Posted Wednesday, October 6, 2021 2:54 pm
By Hannah McClellan
News + Record Staff

As the impacts of climate change continue to be felt on a national scale, Chatham County is not immune — particularly with significant development and population growth expected over the next 20 years.

“Chatham doesn’t just exist in a vacuum,” Chatham Environmental Quality Director Kevin Lindley told the News + Record. “As climate change impacts other places, we can expect it to impact us here too.”

The average global temperature has increased about 1.8°F since 1895, with most scientists attributing this warming to increases in carbon dioxide (CO2) and greenhouse gas emissions due to human activities, and it’s projected to rise by as much as 4°–8°F — under current emission rates — by the end of this century.

In North Carolina, the annual average temperature has increased by about 1.0°F since 1895, according to the 2020 North Carolina Climate Science Report (NCCSR), which was led by the North Carolina Institute for Climate Studies to support Governor Roy Cooper’s Executive Order 80 on climate change and clean energy. The most recent 10 years in the report (2009-2018) are the warmest 10-year period, the report said, with recent data indicating that 2019 was the warmest year on record for the state.

The News + Record is unaware of any studies which examine Chatham’s climate specifically, but a 2019-20 Chatham greenhouse gas inventory carried out by the county showed small decreases in most emission categories from the year prior — likely due to COVID-19.

With an entirely Democratic board, the county is perhaps uniquely positioned to invest in practices and adopt policies that help to stunt CO2 emissions and mitigate negative impacts of climate change, such as flooding and increased storms. (Nationwide, Republicans in elected office generally don’t prioritize climate change; some party leaders publicly refute it.) Chatham County is limited in what it can do because of state jurisdiction as well as low emissions levels from the county government itself. Still, local officials and leaders are pushing for creative solutions.

“What’s interesting is that Chatham County’s internal government accounts for the least amount of emissions within the county, it’s actually less than 1% of the total emissions,” Emily Apadula, the county’s environmental sustainability intern, told the board at its July meeting. “Going forward, you might think that it’s not worth it to try to decrease the government’s emissions. However, the government can act as a trendsetter, a leader and role model when implementing new sustainability projects and taking actions that might encourage citizens to follow them.”

Lindley, who directs the county’s solid waste & recycling and sustainability divisions, said the county is looking toward adding solar panels to its buildings, as well as buying electric or hybrid electric cars as old ones need replacement. The county is also working to install two electrical vehicle stations, one in Pittsboro and one in Siler City, he said.

“Climate change is real,” Commissioner Diana Hales told the News + Record. “And I would like our county to do what it can to help, at least, our situation within the county.

“For me, that means better developments that are including more stormwater runoff mechanisms,” Hales added. “I also think there are certain things we can do with buildings, to add solar capability and geothermal heating. The new high school (Seaforth) and Chatham Grove have geothermal capability — that will make a huge difference over time in terms of energy efficiency, so we can do that.”

Transportation is the largest greenhouse emissions sector by far, according to the county's greenhouse inventory, nearly double the next-highest sector, industrial.

"Helping county residents, industry, and government accelerate a switchover to clean electric powered vehicles and equipment will reduce our county's contribution to climate changing gases," Cooper said. "...So our committee has been studying ways that comparable local communities have promoted both the reduction of emissions and regenerative practices."

The county is also developing a Unified Development Ordinance, a document which outlines traditional zoning and subdivision regulations along with other desired city regulations such as design guidelines and water management. That UDO will update, modernize and integrate existing county regulations into a single document, and implement the future vision of the county laid out in the 2017 Plan Chatham document — including any more sustainable regulations for high density development in particular.

“One thing we know is developed land never becomes undeveloped,” Howard said at that meeting. “And if we can look at ways of encouraging or incentivizing the preservation of trees, in development, that might go some way.”

‘Focus locally on what you can change’ 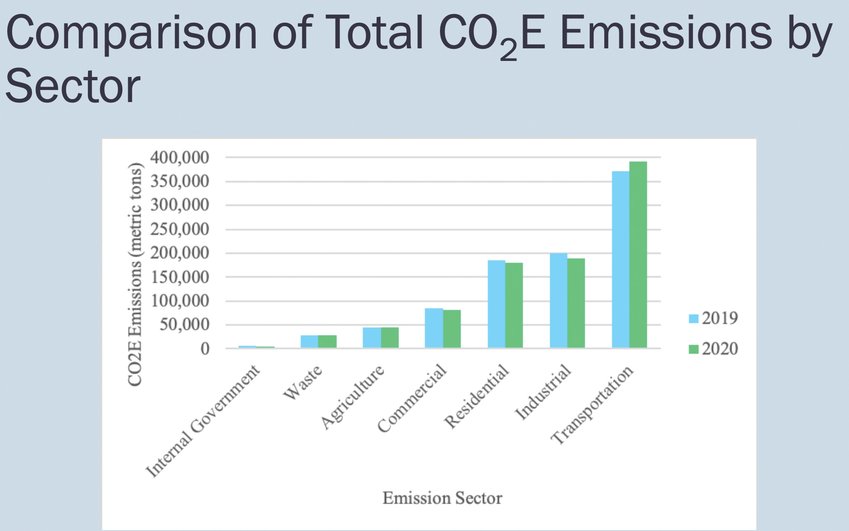 Apadula, the environmental sustainability intern, said greenhouse gas inventories are important tools in the fight against climate change, as they can help keep track of progress.

“I would focus locally, because as much as Chatham County is amazing, the state is usually what determines the larger energy grid,” Apadula said, “And so I would focus locally on what you can change, like the carbon sinks,” which are natural environments that absorb more carbon than they release.

Approximately 65% of the county (456 square miles) contained some form of carbon sink, the presentation said, most commonly forest areas.

The commissioners proposed meeting again to further discuss potential policies the local government could enact to reduce emissions, but it’s unclear when such a meeting will occur.

“Obviously the internal government is not this giant contributor to it, but I think on issues like this, it’s very easy to kind of put everything to the state and to the feds and to the UN and everybody else,” board Chairperson Mike Dasher said, “and that there’s not anything we can do. I think we can set a really good example, and I guess I just I’d like to see us doing as much as we could internally.”

The Chatham County Climate Change Advisory Committee will present its annual report to the board of commissioners at its Nov. 1 meeting, which will include suggestions for a 2021 climate action plan. One such suggestion is for the county to become a “carbon negative” county, rather than a “carbon neutral” one.

The county’s greenhouse inventory showed emissions exceeded 900,000 CO2E, with an estimated 1.1 CO2E removed by carbon sinks. (The committee’s estimate was made “with significant uncertainty,” the draft presentation said.)

“The County is currently roughly carbon neutral,” that draft presentation says, “but emissions may increase over time with population growth, (and) carbon sinks may be reduced due to development.”

The committee also recommends the county conserve lands — such as the Haw River Trail — develop a tree protection ordinance and promote sustainable agriculture, among other things. Earlier this year, the board passed a priority for Article 46 sales tax revenues to go toward farmland preservation, in recognition of the impact of land preservation on things like water quality.

Commissioner Hales said planning ahead for future problems is important, even when it might feel like such efforts aren’t making an impact. County operations such as building processes, subdivision watershed protections and managing Jordan Lake could have a huge impact in 10 years, she said.

“Climate change is real, and it is having an impact,” Hales said. “If we can start the conversation, then that will be less impactful. Yes, it’s going to have an impact. But if we can mitigate, by our practices, some of the consequences, then that’s important to do.”